Release is the cycle between depressing the release button fully and return to the ready position. While seemingly near instantaneous, technicians see this as a discernible sequence of events. This lesson teaches you that sequence, how various cameras go about achieving and controlling the sequence, feedback systems, troubleshooting and repair.

When you complete this lesson you should understand release systems, release logic and how to troubleshoot and repair cameras with release problems. 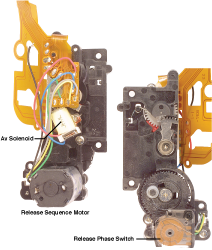 Hands On Lab: Software Troubleshooting a D SLR Release Problem *  Requires PC with XP or XP on Segmented Drive.  Another lab will be availabe